When you hear Toyota Hilux, you know it is one of the most popular vehicles in the world. This truck offers performance that exceeds the expectations of the most demanding public, both on and off the road. Another great thing about the Hilux is its foolproof durability. So far, it all sounds great; however, the Hilux is a tough truck to find in the United States. This factor raises the following question: why can’t I buy the Toyota Hilux in the United States?

The answer is straightforward, the main reason we cannot buy the Toyota Hilux in the U.S. is the “Chicken Tax.” This tax consists of a 25% tariff increase in the final value of the truck, which the American government imposes on imported light trucks like the Hilux.

The “Chicken Tax” affects this type of truck and applies to other products such as potato starch, brandy, and dextrin. If we had a Toyota Hilux manufactured in the United States, as with other Toyota models, it would not be affected by this high tariff. In summary, selling the Hilux in the U.S. is not feasible. It would be priced too high for the market and would not be able to compete in the compact pickup truck segment. We will continue to develop this exciting topic in the following sections.

Some Historical Background On The Toyota Hilux

Some Americans who don’t know much about it may surprise how popular the Toyota Hilux is worldwide. Outside the United States, the Hilux has the favor by thousands of truck buyers since 1968.

Many people classify the Hilux as a compact pickup. Still, the reality is that since 2004, experts have considered it primarily a mid-size truck, starting with the launch of its seventh generation.

A curious aspect to emphasize is that the Hilux was in the American market until the truck no longer used the name in 1976. However, the truck continued to be available for sale until it found its replacement in the new Tacoma in 1995.

The Hilux truck entered its eighth generation in 2018, and Toyota now markets it in Thailand, Argentina, South Africa, and Pakistan. Today we can find the Hilux has versions with three different gasoline engines, six different diesel engines, and six-speed automatic and manual transmissions. The combination of mechanical features will depend on the preferences of each market where you are.

What Is The Meaning Of The Word Hilux?

The meaning of the word Hilux is straightforward. Hilux combines the words “High” and “Luxury,” merged in an abbreviated form to form Hilux. Many of today’s pickup trucks indeed have a lot of luxury. Still, Toyota was one of the first to offer a compact pickup truck with attractive and finely finished retail elements.

The Hilux was always at the forefront of interior comfort. It also has many other features that broadened the appeal of the Hilux far beyond that of a heavy-duty vehicle.

The popularity of the Toyota Hilux is mainly due to its capability and power, styling, versatility, and well-deserved reputation for durability. Hilux has different body styles with various powertrain options to suit every market, plus a wide price range depending on how equipped we need it to be.

Why Can’t We Buy The Toyota Hilux In The United States?

As we established initially, the main reason why you cannot buy a Toyota Hilux in the U.S. market has a name, and it is the “Chicken Tax.” The U.S. government created this tax to charge a 25% tariff on imported light trucks and other products.

One way to avoid this tax would be to manufacture the Hilux on American soil. In the same way, Toyota does with other models in its portfolio. In essence, Tacoma is Toyota’s response to the Chicken Tax.

In this way, the Chicken Tax prevents Hilux from having the opportunity to compete in the U.S. pickup truck segment because this tax makes the Hilux too expensive. However, if you wish to import a Hilux from another world, you can do so. The only thing is that you will be buying a Hilux that will cost you more than a new Tacoma. You have to add up all the additional costs associated with the import, including the 25% Chicken Tax.

Also, you should consider that you will lose a lot of money if you decide to sell it at some point.

Is The Toyota Hilux Prohibited In The United States?

No. U.S. law does not prohibit the sale of the Toyota Hilux; no law prevents you from buying this truck. You have the right to import a Hilux from anywhere in the world. However, you should know that although the laws do not prohibit the importation of the Hilux into the U.S., you might find another kind of challenge. The main difficulties will be related to all the additional expenses you will incur.

The Popularity Of The Toyota Hilux Vs. The Tacoma

In terms of popularity, the numbers speak for themselves. Sales of the Toyota Hilux are more than double those of the Toyota Tacoma, even though the Hilux has no U.S. presence.

Toyota sold approximately just over 250,000 units of the Tacoma between the U.S. and Canada in 2019. While in that same year, Hilux models sold more than 550,000 units worldwide. To appreciate the dimension of this feat, we must know that the United States is the world’s largest market in the pickup truck industry.

Another statistic that supports the massive popularity of the Hilux is that by 2019 it was the fourth best-selling pickup truck on the planet, behind only the Ford F-150, the Ram 1500, and the Chevy Silverado 1500.

One factor that significantly boosted the Hilux’s popularity occurred in 2017. In that year, the Hilux appeared on the U.K.’s worldwide hit show “Top Gear.” The show’s hosts bought a Hilux that already had 190,000 miles to destroy the truck by putting it through a series of demanding tasks designed to finish even the most challenging vehicle.

Toyota claimed that the Hilux was the toughest vehicle on the planet, so the program set out to prove otherwise. The extreme tasks were driving over buildings downstairs, crashing into trees, or leaving it stationary on a ramp to wait for the tide to come in and flood the truck.

When the drivers completed this last extreme test and the Hilux was removed from the site, a mechanic was able to work on it using only a basic set of essential tools and no spare parts. The result was that, despite having a wholly flooded truck, the Hilux was able to start and drive away.

Is It Possible For The Toyota Hilux To Return To The United States?

The Toyota Hilux was present in the U.S. market from the mid-1970s. By the mid-1990s, it was forced out of the market by the entry of Tacoma.

Since then, the Hilux has continued its evolution in all markets around the world except the United States; however, some rumors indicate that it could return to the U.S. market in the future.

There is not much official information on this subject. Still, specialized sources such as Autowise indicate that a Hilux model with a third-generation Toyota turbodiesel engine could appear in the United States at any time. It is a rumor that has been sounding since 2017.

There are also rumors that Tacoma and Hilux will get closer and share more and more parts and design elements in the future. Still, it’s all just rumors without any official confirmation from Toyota.

A Final Thought On Why We Cannot Buy The Toyota Hilux In The U.S.

It is essential to emphasize that there is no legal restriction to buying, using, or importing a Toyota Hilux on North American soil. The main element that prevents the commercialization of this truck lies in the additional 25% tariff or “Chicken Tax” that would fall on the value of the vehicle for import.

If you are passionate about this spectacular vehicle, you can buy it anywhere and import it to the United States. Just be aware that it will cost much more than a new Toyota Tacoma. 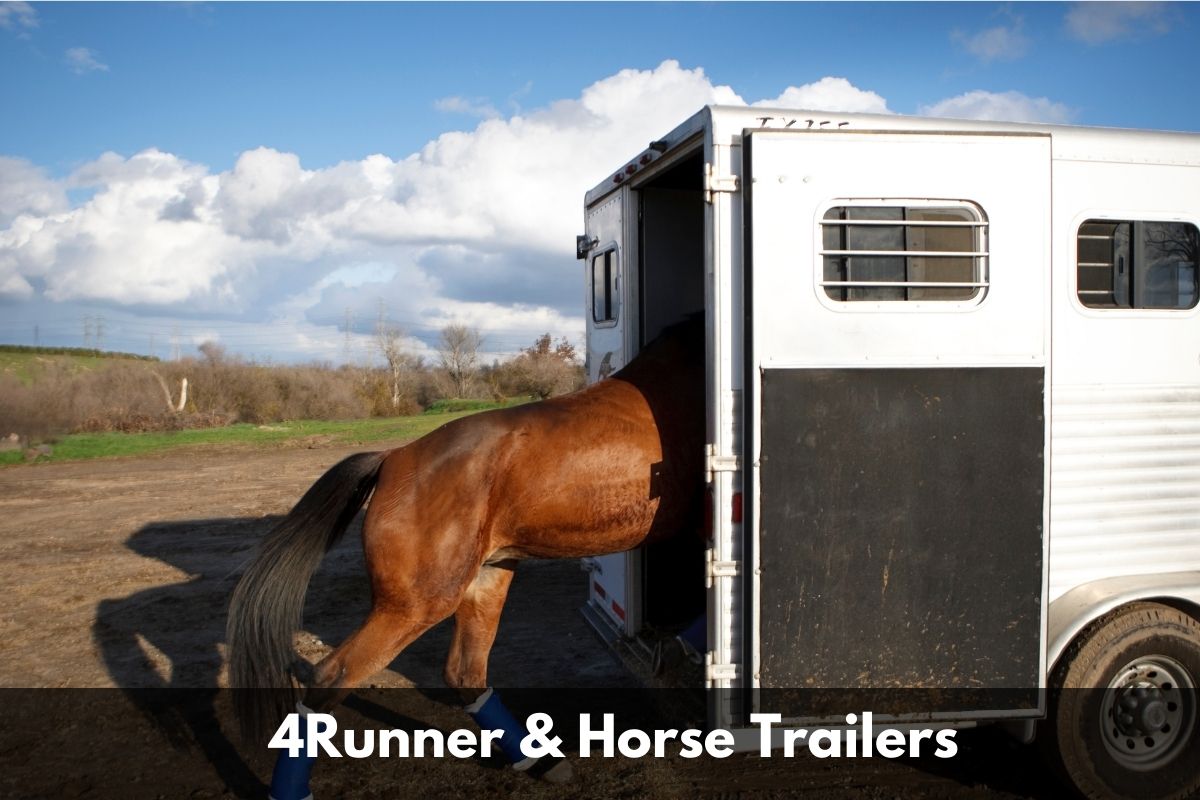 Can I Pull A Horse Trailer With A 4Runner

Where Is The Toyota 4Runner Made?